Limecraft Flow is the world’s first collaborative workspace that combines ingest and handling of dailies, computer assisted logging, transfers back and forth post-production, online sharing and reviewing, and management masters including subtitling and localisation. Limecraft Flow lets you work faster and deliver a higher quality because you don’t have to switch between multiple apps or transfer data between different tools.

With the first real in-person conferences and trade shows on the horizon, Limecraft is excited to announce the next releases of Limecraft Flow and Limecraft Edge, including extended support for multi-channel audio, a raft of additional options to control the layout of subtitles, full support for automated offloading and backing up of cards, complete refactoring of the encoding engine and further improving the accuracy of speaker segmentation and speech recognition. Also, we are working on the ability to export video with encoded subtitles, rather than to export subtitles as a file. Below a sneak preview, we welcome inquiries for beta testers.

The Audio Channel Layout, Audio Layout or Channel Mode of video or audio show the nature of sound reproduction. In the case of video, it only refers to the way audio is played out. The two most commonly used Channel Layouts are mono and stereo, but also surround sound flavours and custom configurations are possible. Furthermore you can qualify the different audio channels according to the nature or the language of the audio, loudness, codec, etc.

Audio Channel Details of media are accessible in the library through the clip metadata in the item detail, according to the Audio Channel Layout configuration that has been set up by the post-production supervisor or the production manager. Each channel can be attributed ancillary data such as nature of the sound, language, loudness, bitrates, etc.

Content is increasingly produced for publishing on different channels or platforms, often imposing different requirements for subtitles. As of this release, you are able to create and use different style guides in a single project. For example, you may need a stylebook for widescreen television (40 characters on a line and maximum two lines), another one for social media (typically 26 characters on a line and using 3 lines of subtitles), and a specific set of rules for each VoD platform. 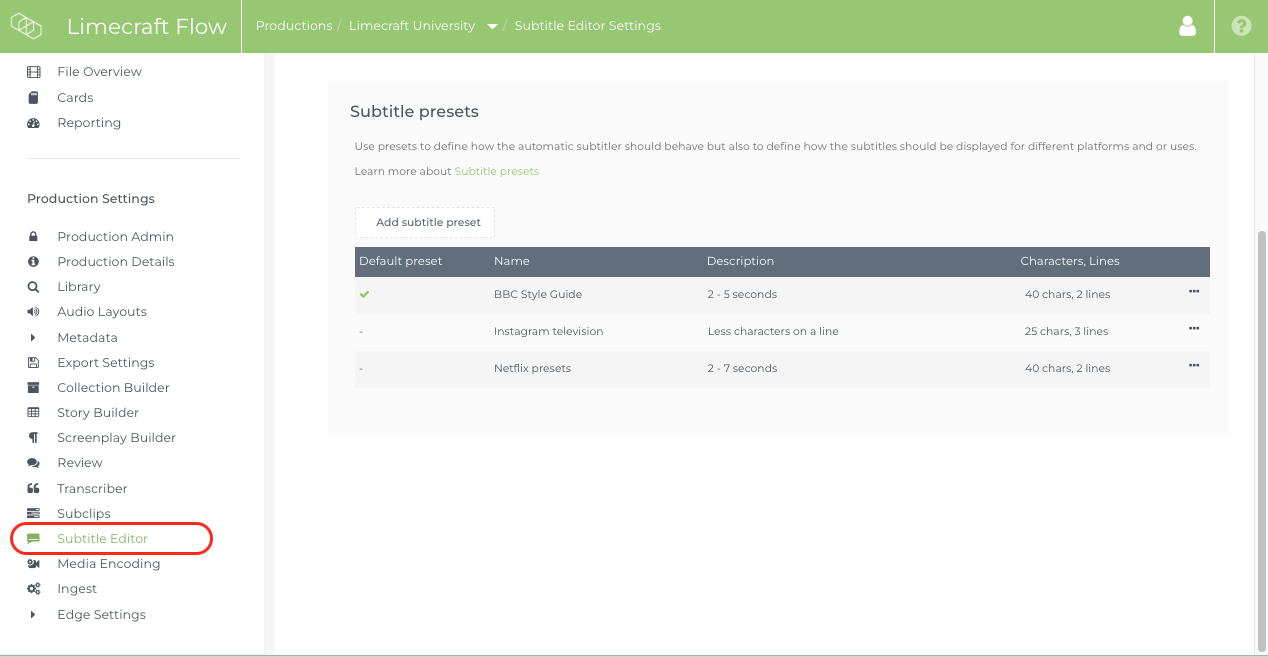 Further to the manipulation of the timing settings of subtitles, as of this 22.3 release, you now also get extensive control over the layout of the subtitles, including location, font and font size, as well as the background. 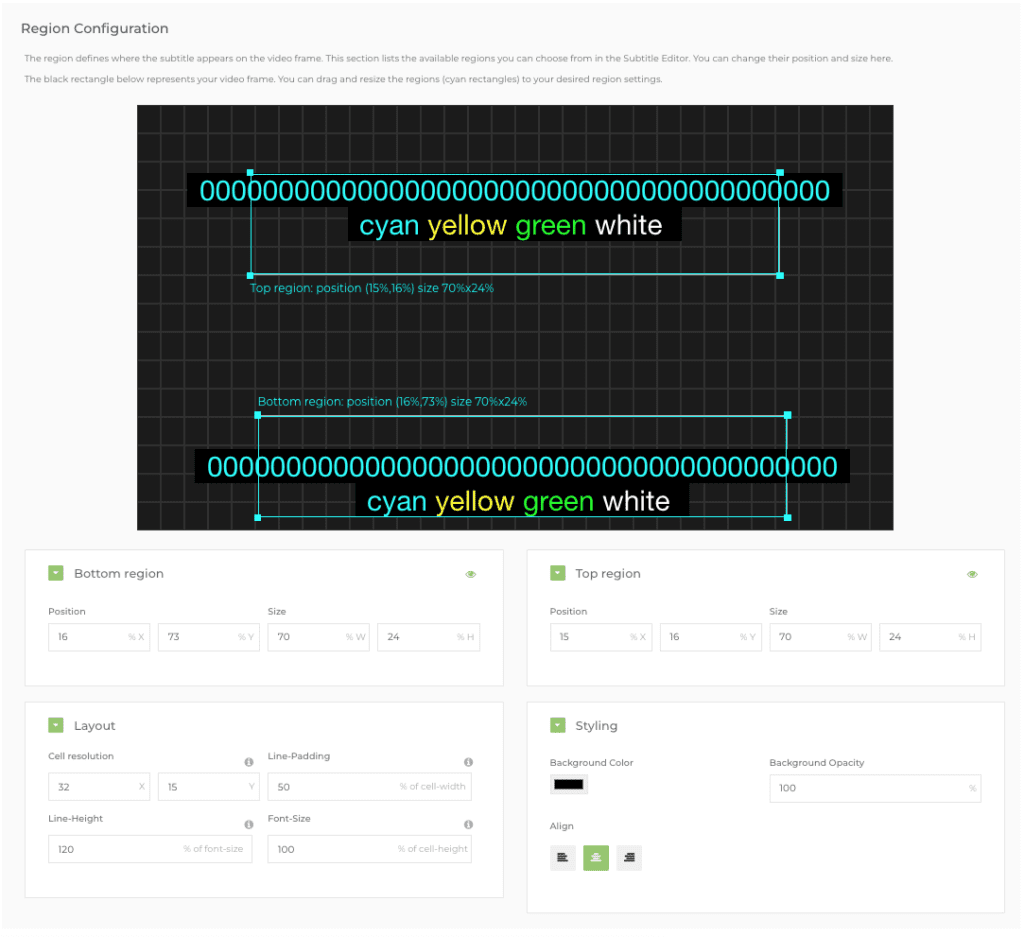 More info on the knowledge base about operating multiple subtitling settings and the configuration of the extended spotting rules.

Check-in and check-out of Camera Cards

Many high-volume producers asked us to better support of camera cards in post-production. So as to prevent creation of folders or ad hoc collections of files, camera cards need to be archived, managed, and checked out by online editors as such, including technical metadata or the “Manifest”. By balancing tape and online storage they generate significant savings in terms of online storage. The automated workflows driving the storage management help avoiding errors and reduce the turn-around times. Material can be easily retrieved and instantly used in post-production without manual intervention, regardless the size of the database.

In a first step, camera cards are recognised by Limecraft Edge and transferred as such to a Networked Attached Storage or NAS. In parallel, Edge also creates web proxies and sends them to Limecraft Flow, including the notion of their grouping as a card and adding the card manifest to the collection. Next, a custom workflow to archive those cards as such from the NAS to the tape drive (in this case driven by Archiware) is triggered by Limecraft Flow (in the cloud) and executed by Cloud Connector (running on premise). 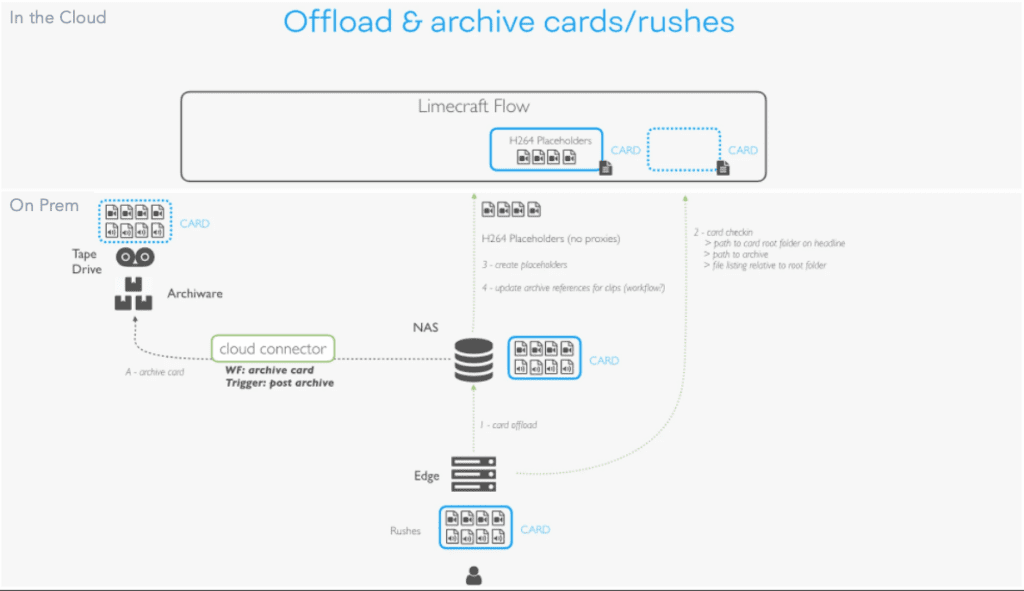 Limecraft Cloud Connector reports status updates to Limecraft Flow, where the data handler or edit assistant can follow up the execution of the associated workflows. 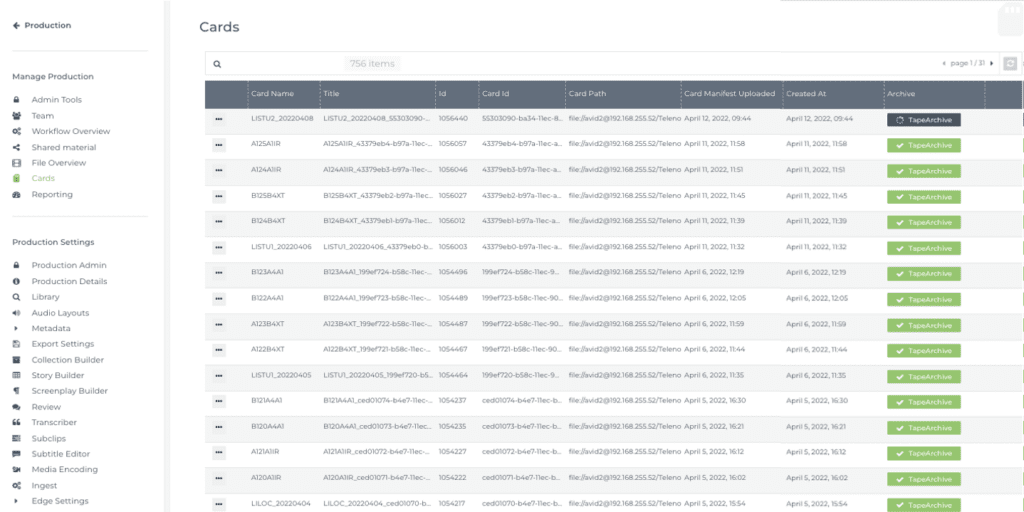 At any later point in time, editors can check out cards as such from the NAS or retrieve them from the tape robot for grading or finishing. 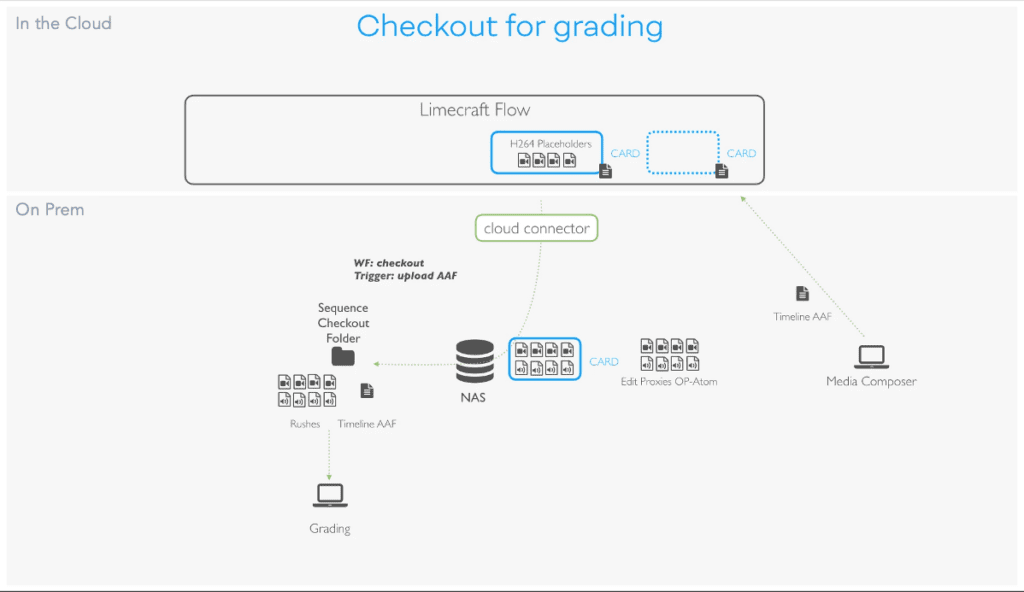 A massive Update of the Encoding Factory

​Limecraft Flow and Limecraft Edge extensively use encoding processes at ingest and export stages. To that purpose, both components use the same powerful video and audio encoding pipeline. To avoid configuration errors, the post-production supervisor or production manager can now access and pre-configure the shortlist of encoding profiles centrally as part of the production settings. 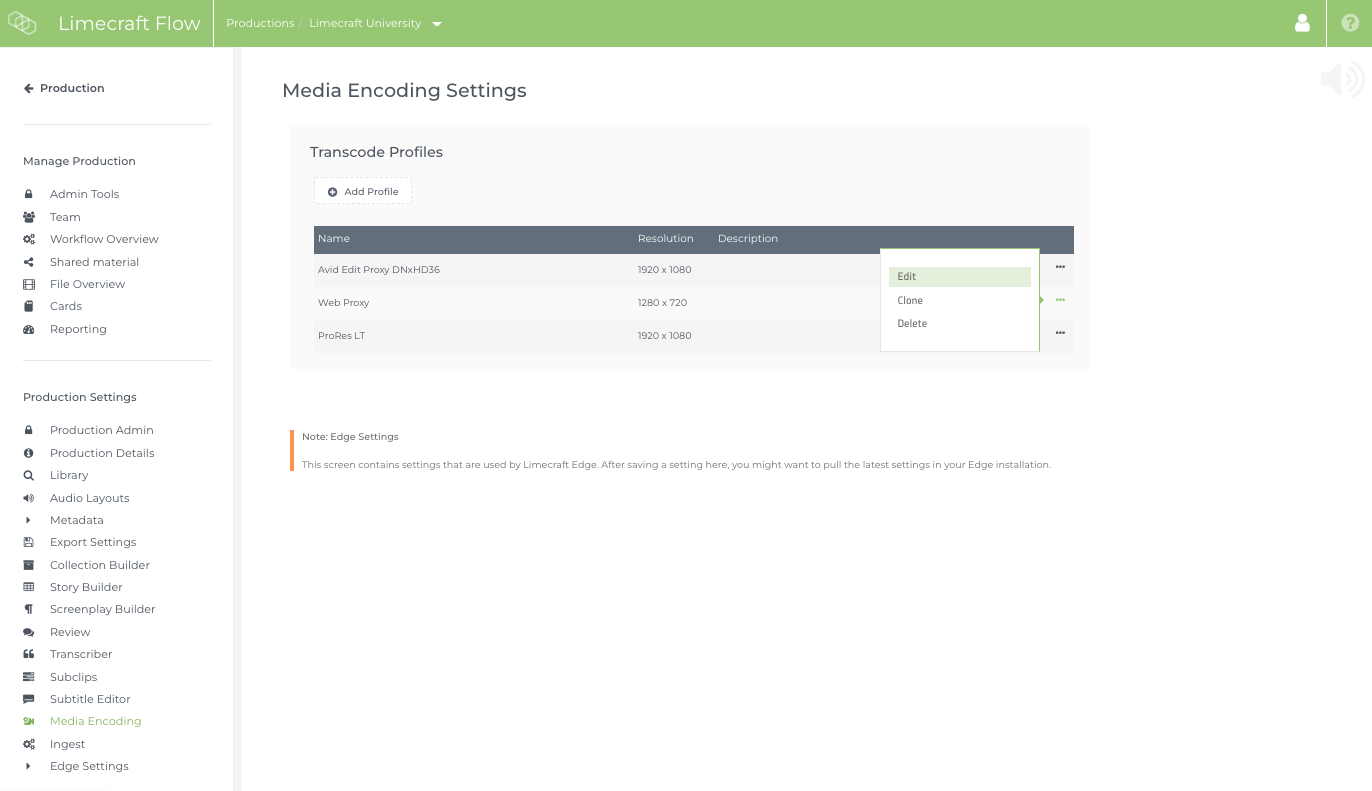 From this point on, as an authorised user you can edit the audio and video encoding parameters to a very detailed level, including audio transformation and channel remapping, watermarking, colour space adaptation, cropping and scaling, and many more. 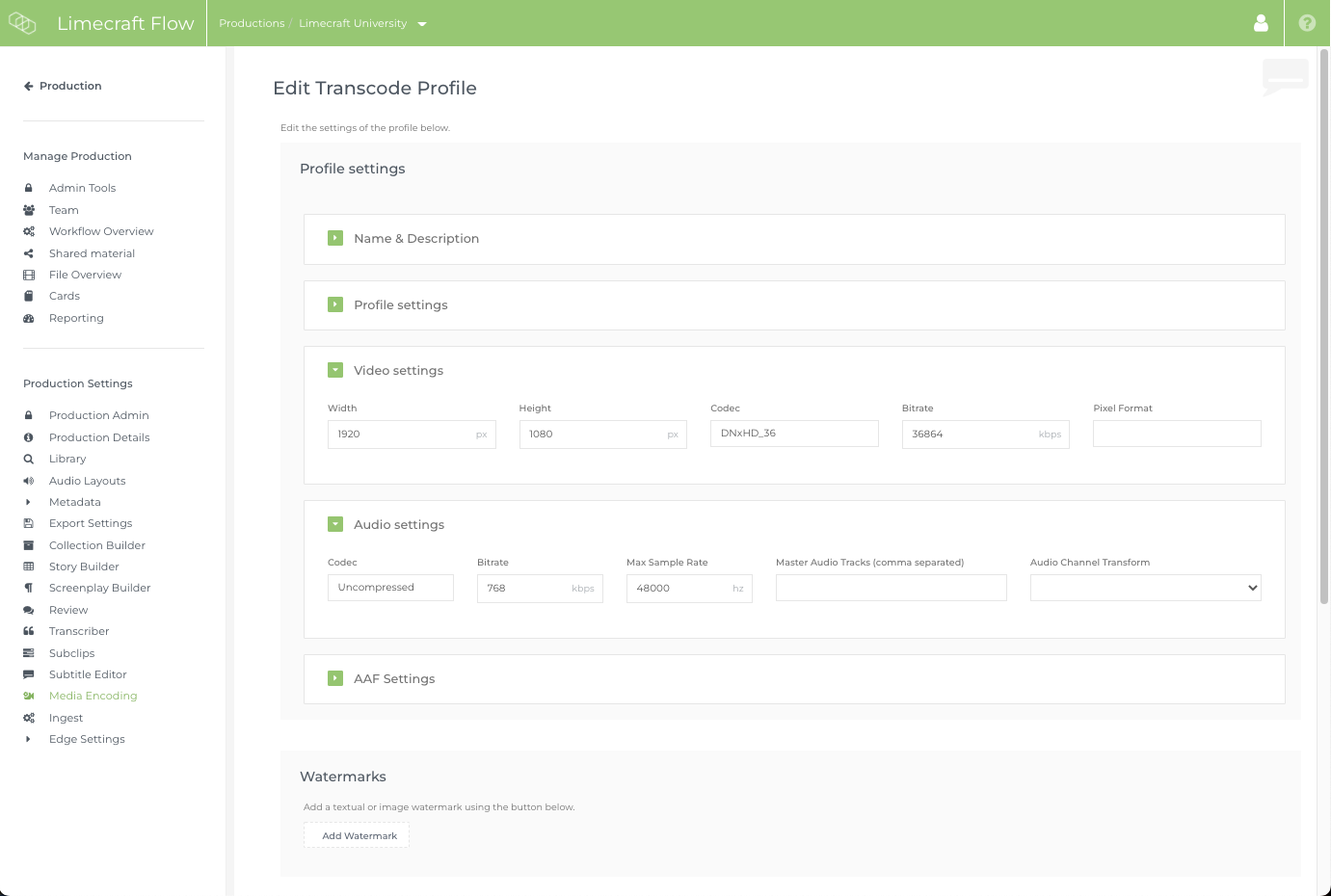 More info on accessing encoding profiles and manipulating the encoding settings are available on the knowledge base.

Limecraft strives to deliver the best possible speech-to-text experience for professional use. We are constantly looking to improve our services to have better speaker segmentation, to lower the Word Error Rate (WER) and to improve interpunction. The last couple of months, together with our partner SpeechMatics, our engineers significantly improved the recognition accuracy for several minority languages including Dutch, Swedish, Norwegian and Lithuanian. We were also able to improve speaker segmentation, especially for larger files with many speakers.

While many subtitle editors used to deliver subtitle files as a deliverable, subtitles are increasingly created by journalists or editors. Often intended for social media or other forms of online distribution, they require video and subtitles to be published as fast as possible. Now, while we would typically advise to use a sidecar subtitle file on the platforms that allow you to do so (YouTube, LinkedIn), some platforms allow no other option than to use video with embedded or “burned-in” subtitles.

Export as a video file with encoded subtitles is currently in private beta. We welcome users and partners willing to join the beta-test the current solution.