In Leander Verdievel’s tragicomic fiction series, the life of a 25-year-old medical student is turned upside down when he gets cancer and becomes a patient himself. The scenario was based on testimonials from (former) cancer patients, and the cast includes Maarten Nulens, Els Dottermans, Dirk Van Dijck, Marthe Schneider, Barbara Sarafian, Liesa Naert and Vic De Wachter.

“A story with painful situations and hard emotions can be told in a lighter way by means of funny dialogues and hilarious situations. These help to cope with the harsh reality and it is a way to bring drama with a good feeling,” said the jury. “It is a tragicomedy in which you clearly recognise difficult situations, presented in such a way that makes you want to see even more of them.”

The crew of “Gevoel voor Tumor” used Limecraft Edge for ingest automation and Limecraft Flow controlling the production. 10.000 clips of material shot on ARRI Alexa Mini and delivered in ProRes 4:4:4, were processed and ingested overnight using Edge, audio synchronised and colour graded. By doing do, material was available for review the day after the shoot, thereby saving invaluable time in case a quality issues. 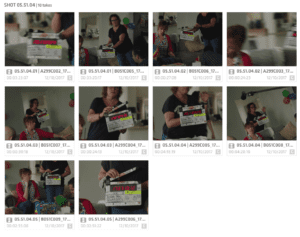 More importantly, taking advantage of Limecraft Flow’s ability to cut shots into scenes and to present shots and takes automatically in the sort order of the screenplay, thereby reducing logging and pre-cut overhead to a minimum.

In parallel, edit proxies were send to the edit suites in parallel, reducing the time between shoot and edit to a single day. Thanks to Limecraft’s ability to maintain the link between the different versions of the clips, editors could swiftly conform the Edit Decisions using the original footage.