De Mensen, one of the largest independent producers in Belgium, creates scripted and unscripted entertainment including international hits like Beau Séjour and Undercover. For the production of the telenovela ‘Lisa’, they set up a new cloud-based workspace optimised to more easily handle large volumes of content and to improve collaboration. Using cold storage managed by Archiware and Limecraft on top, allowed them to create significant saving and achieve the optimal balance between cost and performance.

De Mensen at a glance 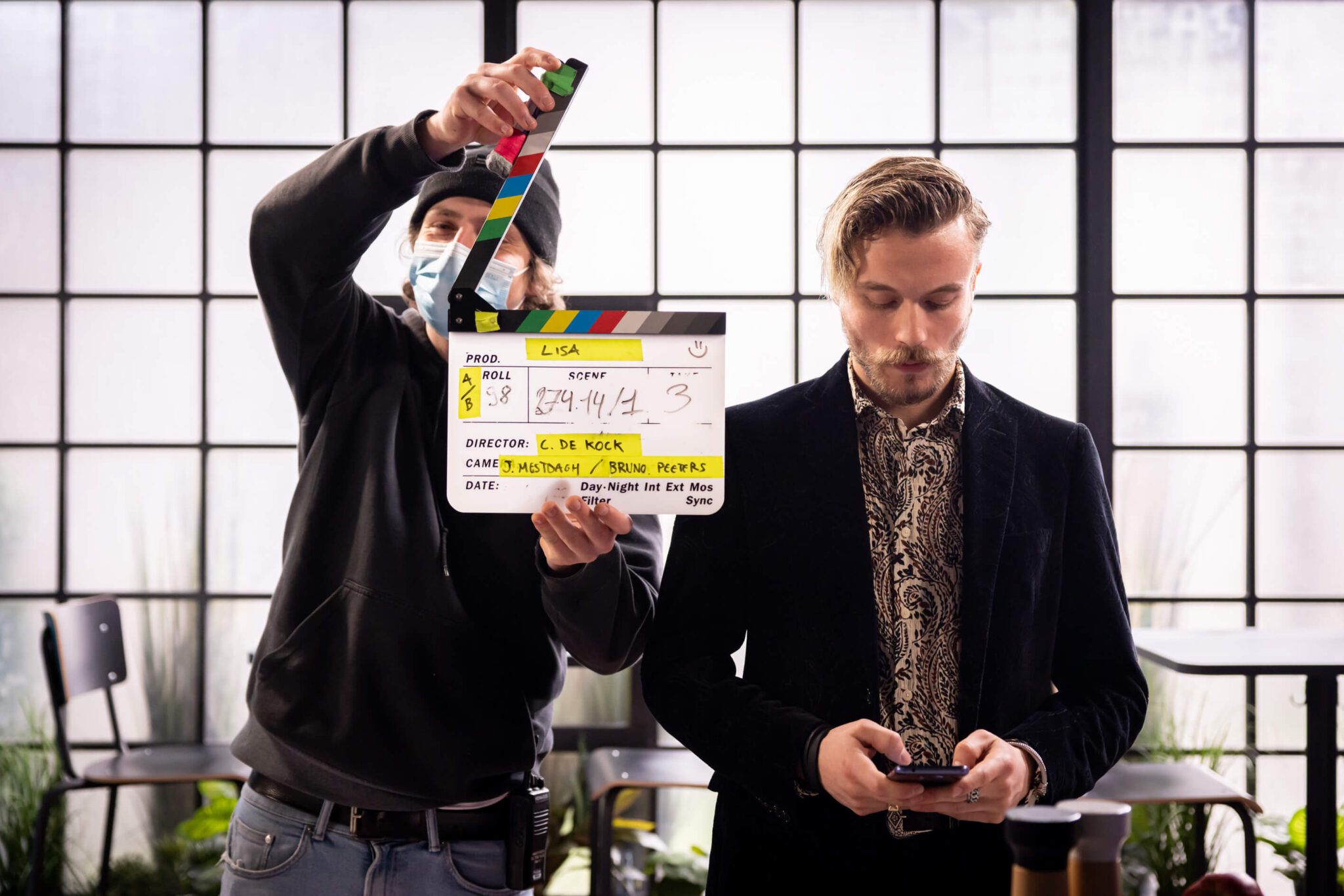 De Mensen, part of Newen Group (TF1), is one of the leading Belgian producers. Probably best known for their international co-productions Undercover, Beau Séjour and Ferry, they also produce a continuous drama show or telenovela. Setting up a cost-effective workspace for ‘Scripted Entertainment’ and in particular for continuous drama, has many challenges. The sheer volume of data, the fast pace of the production, and the assumed collaboration between different participants command increased operational efficiency.

De Mensen particularly experienced this when setting up the post-production workflow for Lisa, a telenovela with 285 episodes in three seasons. Together with Limecraft, they customised a workspace to ingest and maintain the vast volume of material between the shoot and the edit on cold storage, to automatically cut shots into scenes, and automate the transfer of the rough cut to the edit suite. Improvement of operational efficiency and a minimum ecological impact thereby go hand in hand. “There is no other software vendor with such a wide range of capabilities,” says Gert Van den Cruijce, post-production supervisor at De Mensen.

The Challenges of managing large Volumes and streamlining Post-Production

De Mensen has been consistently delivering high-quality content for the last twenty years. When they embarked on the production of fiction besides their initial core business of unscripted entertainment, they were looking for a solution to efficiently process and manage large volumes of raw material and streamline post-production. Which is the reason why they started using Limecraft in the first place.

In 2020, De Mensen started producing the telenovela ‘Lisa’; the second season is currently in production. Producing continuous drama requires highly standardised operations, with most of the footage shot in the studio. The edit assistant’s task is to prepare the edit, so as to make sure the editor is capable of completing an episode per day.

The production processes of fiction and non-fiction are completely different. In the particular case of continuous drama, each shooting day results in a vast amount of raw material to process. Processing is taken care of by a small post-production team, and yet it must be executed reliably and efficiently.

At the end of each shooting day, all files are systematically stored on NAS storage and backed up as cards on tape (LTO-8 using Quantum hardware) using Archiware, before being passed on to the edit. Given the large quantity of files, the post-production team makes a pre-selection of ‘circled shots’ which will be used in the edit.

Without Limecraft, the manual selection of images, conversion into the right file format, and forwarding these to external and internal partners would be an extremely labour-intensive and time-consuming process. Using Limecraft, up to 80% of the work can be fully automated. 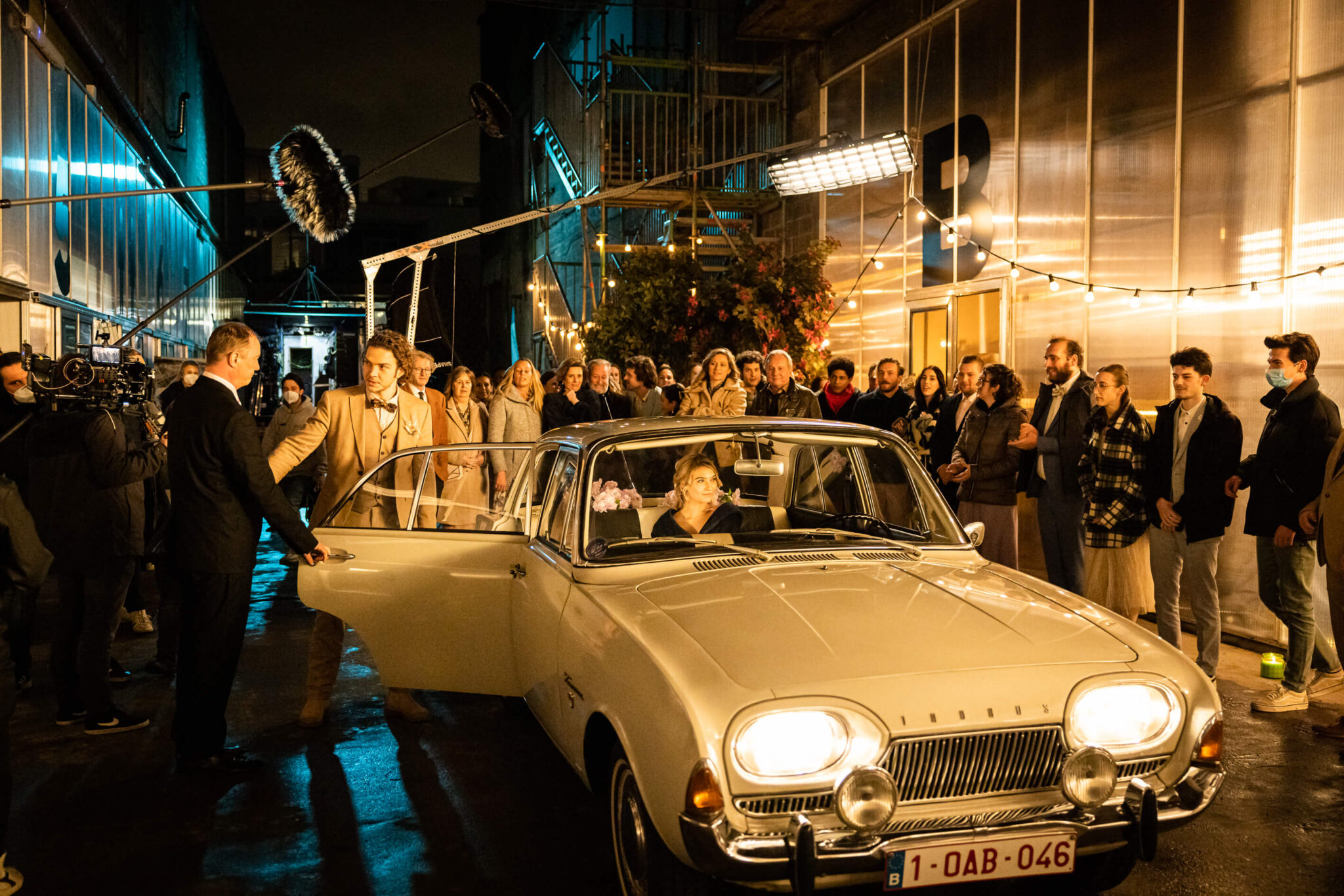 “When Limecraft asked us what we needed, the simple answer was that we wanted to lookup shots quickly and to have them visually organised. Limecraft offered exactly what we needed. To my knowledge, there is no other production software that offers such a wide range of capabilities,” says Gert Van den Cruijce, post-production supervisor at De Mensen.

One of the key advantages of Limecraft is the turn-key integration with backup software such as Archiware and the complete Avid suite. In the past, the rendering, uploading and centralising of recordings was a very manual process. As a result of using Limecraft, the majority of these steps are automated.

“Limecraft understands system integration like the back of their hand. Instead of using a hodgepodge of point solutions and one-to-one integrations, Limecraft is a seamlessly integrated and coherent workspace, hiding underlying technical complexity and allowing flawless operations.”, says Gert Van der Cruijce.

The integration of Archiware and Avid uses turn-key adaptors and didn’t require any bespoke development.  The no-code approach reduces the time and mitigates the risks otherwise associated with system integration, and it allows for much more flexibility in the setup of distinct workspaces per production. 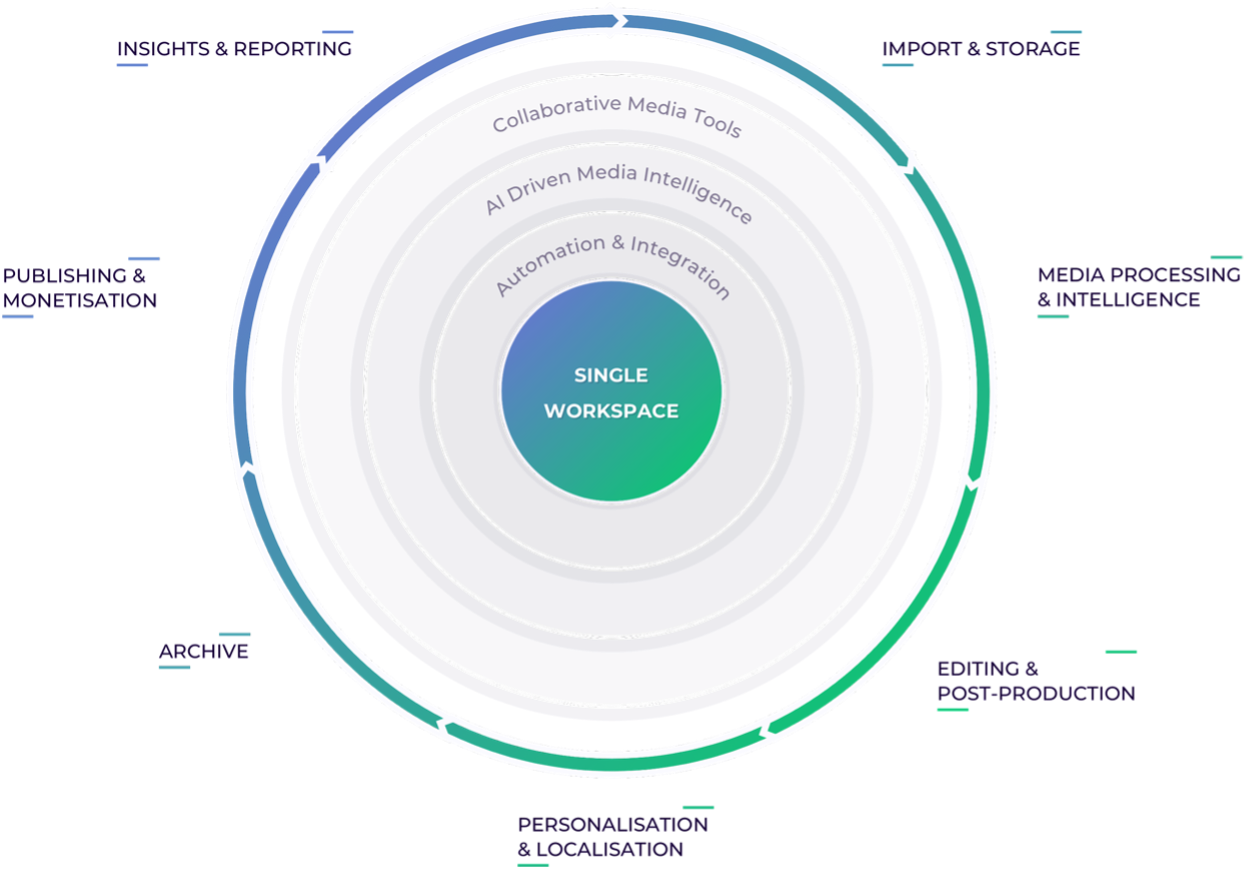 The approach to optimising for efficiency results in enormous time savings. The platform displays what has been produced, shot per shot. Without Limecraft, as a shooting day may result in thousands of files without a readable name, it would be very difficult to spot the right fragments.

“There is no other software that processes the media as intelligently as Limecraft,” explains Gert Van den Cruijce. “For De Mensen it was already a great Media Asset Management (MAM) system. But to produce a telenovela like ‘Lisa’, we had to step up in terms of efficiency. For example, Limecraft uses Artificial Intelligence to process the metadata from the sound files, allowing automatic identification of shots and making them searchable. No other ingest solution has the same effect on visibility.”

“Thanks to automating repetitive work such as selecting the right shots, collecting and forwarding them for post-production including grading and audio, the production assistant has time to thoroughly prepare the work of post-production and the editors use their time more efficiently.”, says Loïc Lefever, edit assistant at De Mensen. “Using Limecraft, the total time to process a shooting days takes 4 hours instead of 8. Moreover, because it is a largely automated process, I can take care of quality control and manage the communciation with the rest of the team at the same time.” Gert Van den Cruijce adds: “We have to deliver an episode every day and Limecraft’s role is critical. The programme selects the right images, organises them, converts them to the right format and takes care of back-ups. That allows the edit assistant to perform more useful tasks for the editor.”

Cost-saving due to the consolidation of tools

Further savings are realised by reducing the number of different software tools and file transfers. Limecraft replaces several point solutions, such as transcoding, online sharing, and pre-cut applications. Fewer tools mean fewer conversions and fewer copies, and therefore in the first place more useful time. But also, an inherently more secure environment and a significant reduction of our carbon footprint.”

A specific example is the edit suite capacity. Edit suites were previously used to process the incoming material, which is an ‘expensive’ seat that should be used for editing and not for repeatable tasks like derushing. Because Limecraft Edge  can be used on any computer and not necessarily needs an edit bay, the edit suite is kept free for work that needs that specific equipment. Furthermore, Limecraft processes the media in the background, so the user can use his machine for other tasks in the meantime.” 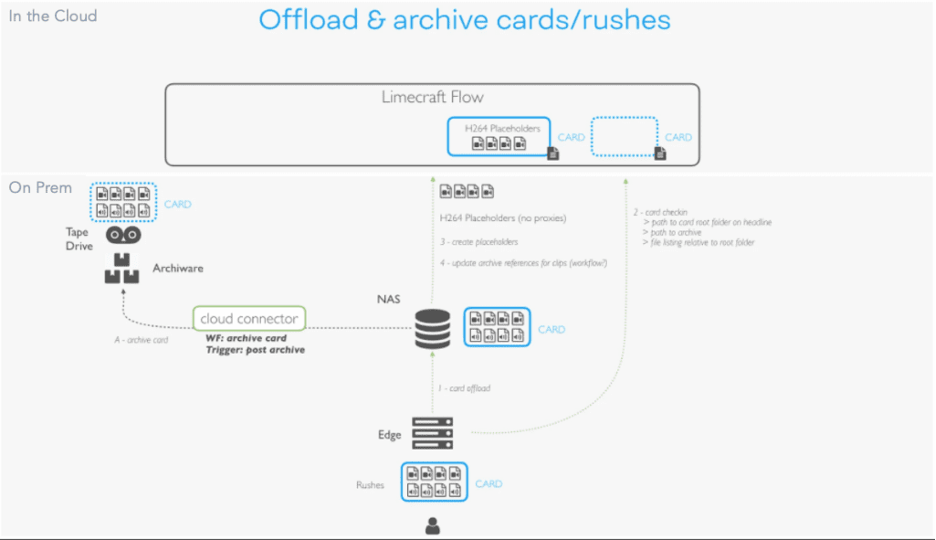 Processing of rushes is a largely automated process. Using Limecraft Edge, which is using a template that determines the details of the ingest process, the audio is synchronised, metadata extracted, the proxies are created, and finally all versions are moved to the right place. The higher resolution materials are transferred to edit storage and backed up on tape by integrating Archiware, with the references being passed on to the online platform Limecraft Flow. By doing so, editors always have instant access to high-resolution material without having to manually operate the tape robot.

Limecraft further reduces file transfers by only forwarding the shots or fragments that are selected for editing. This creates a much more convenient user experience. For example, De Mensen uses the platform to share material for revision and approval. For example, De Mensen shares semi-finished edits to all relevant stakeholders such as the director, tv channel representative, …  that need access for review and or approval.

There is more transparency in terms of workflow. We now have reports available of everything that has been done. Before, these were non-existent. We know exactly who did what and that is important for the workflow. If you have emptied the disc in editing and certain things are not on it, in post-production you can check what you received and what you processed, how many minutes were shot and how much was actually used.

A proxy-based workflow to further reduce storage and computing time

“De Mensen edits in low quality for several reasons: it requires less storage, and you need a less powerful computer. A day of filming is intense and can easily produce 300 GB of footage. Limecraft takes care of the proxies, which we can forward and edit more easily. In parallel, Limecraft provides a fully automatic backup by placing everything on a separate server.”

Once the sequence is fixed, online editors relink to the material of the highest quality. Limecraft is seamlessly integrated with Archiware. It understands which shots should be in the editing, and with surgical precision it retrieves the correct files, which are then sent on to grading. 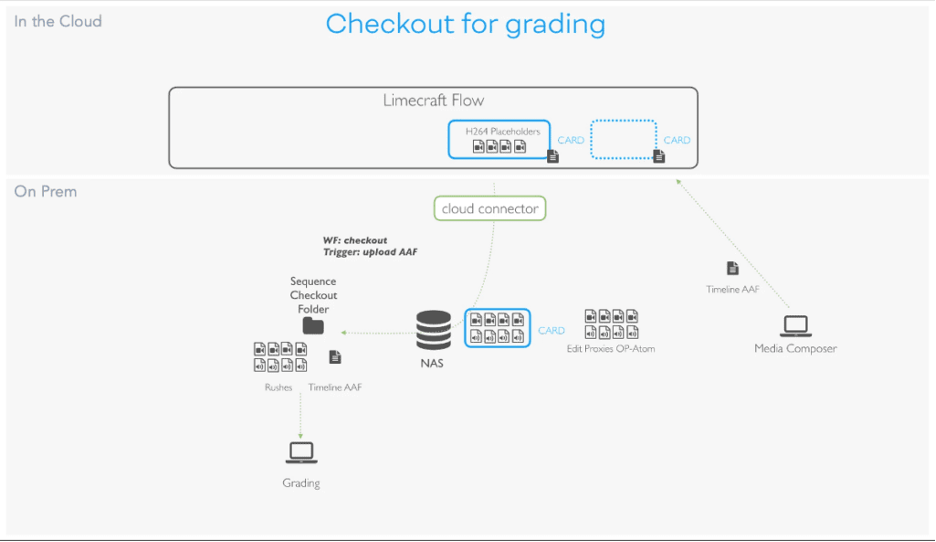 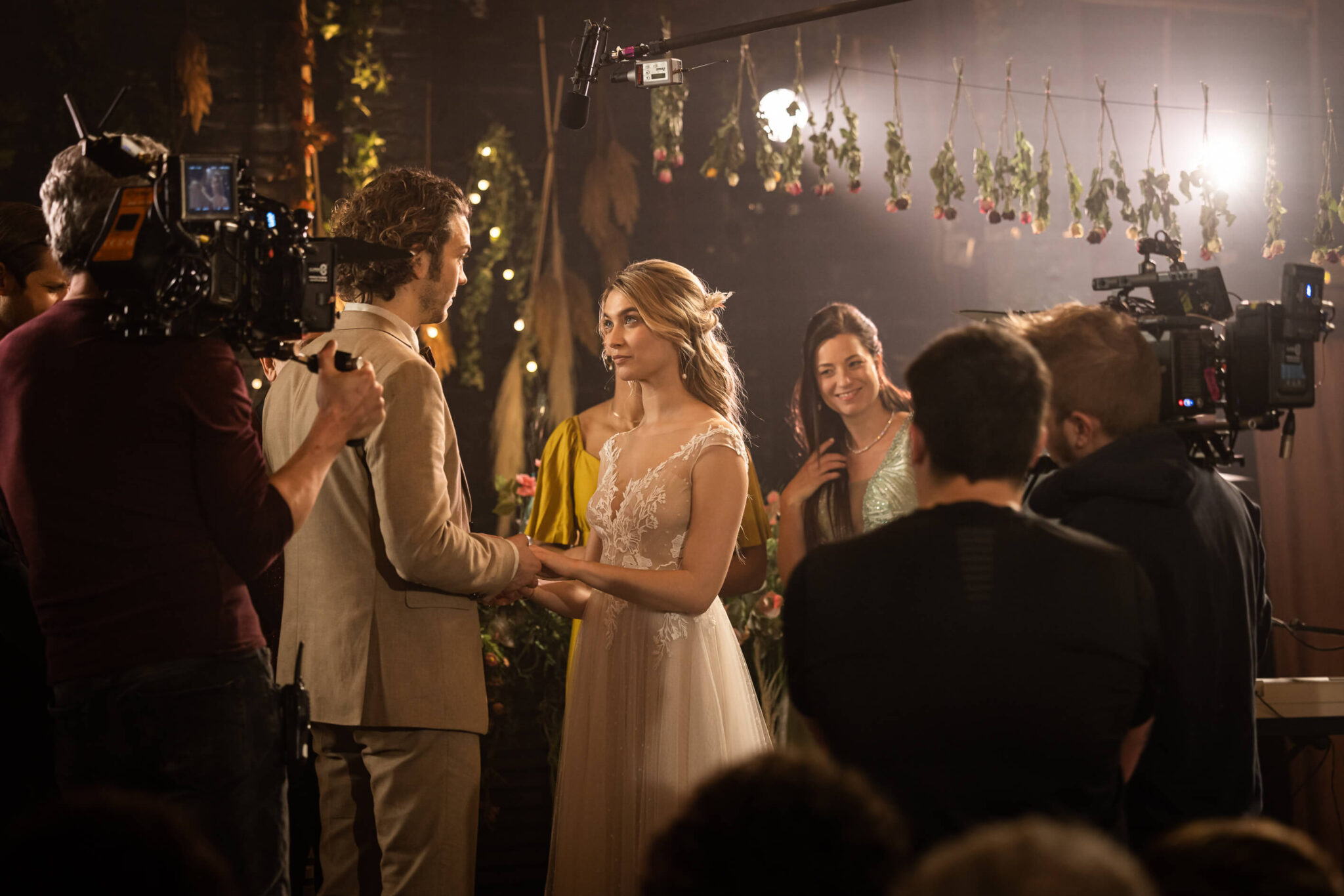 Want to know what Limecraft can do for you? Get in touch