In November we released a number of significant improvements to Limecraft Edge and Flow. Here are some of the most noticeable updates.

We encourage you to keep an eye on this space, as we plan to release a major upgrade in early January.

1. Another level of Rebranding

You’ve been able for a while to update the logo and the colour of the navigation. In the latest release we’ve taken the ability to rebrand the application to another level. In your capacity as Account Manager, you can now also control the look of the notifications, apply your terms of service, or use your internal support manuals, etc. Together, you can use Limecraft Flow to set up your private cloud in a few easy clicks.

Below is a nice example by Livecut.tv, an independent producer of event content. Livecut.tv are using Limecraft to allow freelance producers to share raw material for editing, and their customers to review and approve final cuts. Solid rebranding was important to Livecut.tv to display a consistent corporate identity. 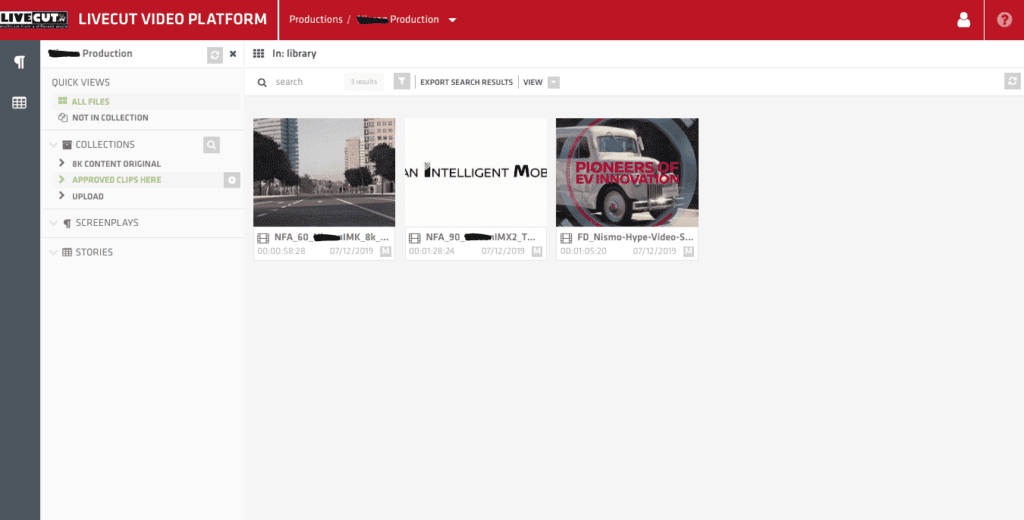 💡 More on modifying the branding on the knowledge base.

To speed up the process of setting up new productions in bulk and to avoid errors in production due to incomplete or missing settings, we’ve introduced pre-configurations on different levels.

On the highest level, in your capacity as Account Manager, you can now define ‘Production Templates‘. Production templates in essence are the entire configuration of a proto-production and may include custom fields, library settings, access permissions, etc. At the point a new production is created in the account, the user is prompted to select a template. The new production will automatically be pre-configured thereby inheriting the settings of the template.

Down the stack, Edge ingest machines can now be pre-configured in a similar way. By defining ingest templates (including audio settings, compression parameters, destination details, etc), the ingest processes can be streamlined, thus removing a frequent source of human errors.

More info on the use of production templates: https://support.limecraft.com/en/articles/3563657-production-templates

Some of you voiced concerns over insufficient transcription accuracy, and causing significant amounts of work in post-editing the machine generated transcription. As we pride ourselves on offering the best automatic transcription on the market, we promptly acted.

Machine transcription can only be as accurate as it has been trained. Many off the shelf ASR (Automatic Speech Recognition) engines are trained exclusively using standard language, and thus fail to transcribe more spontaneous speech. Unfortunately this is exactly the case in video and television production.

So we’ve undertaken serious efforts in training the engine for natural more natural speech, including dialects, grammatical errors, sung words etc. The results are stunning, as we’ve managed to push the Word Error Rate (WER) below the mythical 5% for various sorts of material.

The more customers are using Limecraft Flow for subtitling, the more timing and styling flavours we are supporting.

In the latest release, you can add a marker that sentences are split over different subtitles and you can define the minimum gap between two consecutive subtitles, to comply with Netflix’ styling rules.

In case you’re using time-lapse video in the form of image sequences, you first need to create a video file from the images to prevent flooding your media library with still pictures.

To help you in processing such images, Edge now automatically detects series of still pictures as a time-lapse and offer you the ability to encode them as a single video file upon import.